Difference between revisions of "Architecture Overview" 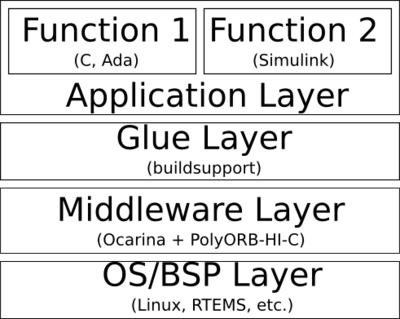 As illustrated in the picture, a typical TASTE Application is composed of the following layers :

The Glue Layer is generated by kazoo and connects application layer code and data with the lower parts of the system. 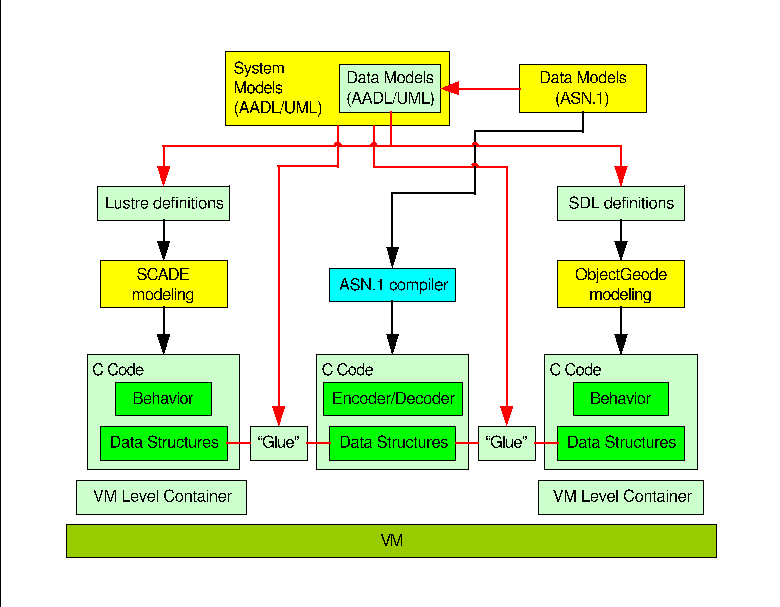 The middleware layer consists in interfacing the glue layer with the underlying Operating System and BSP functions. To do so, it adapts the application code and the glue layer code to be compiled and executed with the target environment (hardware and operating system).

One example of the middleware function is to adapt to several operating system using different primitives. For example, when the glue code creates tasks, the function called to create the tasks would be different, either you are executing your system under Linux or RTEMS : if you are using Linux, you will call pthread-related functions (such as pthread_create) whereas on RTEMS, you would use rtems_task_create and rtems_task_start. To overcome adaptation concerns, the middleware layer provide unique functions to create resources (for example __po_hi_create_task()) that performs appropriate calls regarding the target operating system (Linux, RTEMS, Ada runtime, etc ...).

The middleware layer is composed of two parts:

TASTE can be used with two runtime :

The OS with BSP support is the target execution environment. It is the Linux operating system that executes your application or a specific version of RTEMS with some dedicated special driver. The OS is reused as-it, meaning this is not provided specifically by TASTE. However, as TASTE adapts itself to the underlying OS and BSP functions, the underlying OS and BSP functions have to be supported by TASTE. At this time, the platform supports many OS such as Linux (with or without real-time capabilities such as Xenomai), RTEMS (4.8 and 4.10), etc.